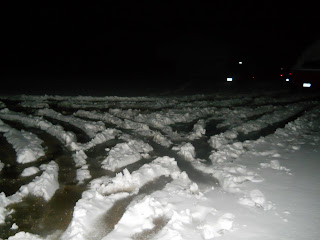 so today is/ was april 15th. It snowed at least six inches in ABerdeen I could not believe it. What a mess. This is the driveway to the shop. Hopefully it will melt away in the next few days. 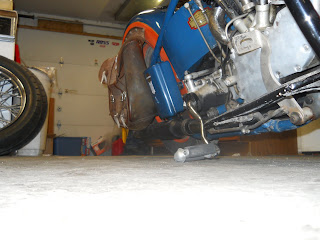 we were up pretty late in the shop hanging out with Ray and decided to check out the clearance on my pipes. Thankfully they clear. This is an original early 36 kicker cover and a 36-37 kicker arm. I am going to go through the transmission in the next month or two and put a later cover and top on it, and also put later gears inside the case. I was so broke when I built this bike that I put old borderline gears in it. Which is ok if you baby it, but i do not baby this bike. I think i have probably gone at least 50 miles in third gear while going 75mph. This is the worlds most abused 36. IT will be a lot better once I put the 58 and later third gear in. 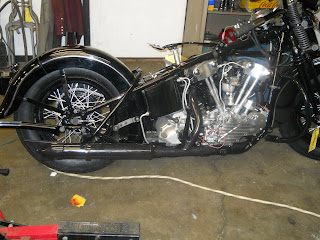 We got a small batch of exhaust back from the painters today. Here is Andy's 47, I will bolt everything down for good in the morning. I am going to focus on this bike all weekend and see what happens. Good night
Posted by Matt Olsen at 4/15/2011 10:54:00 PM