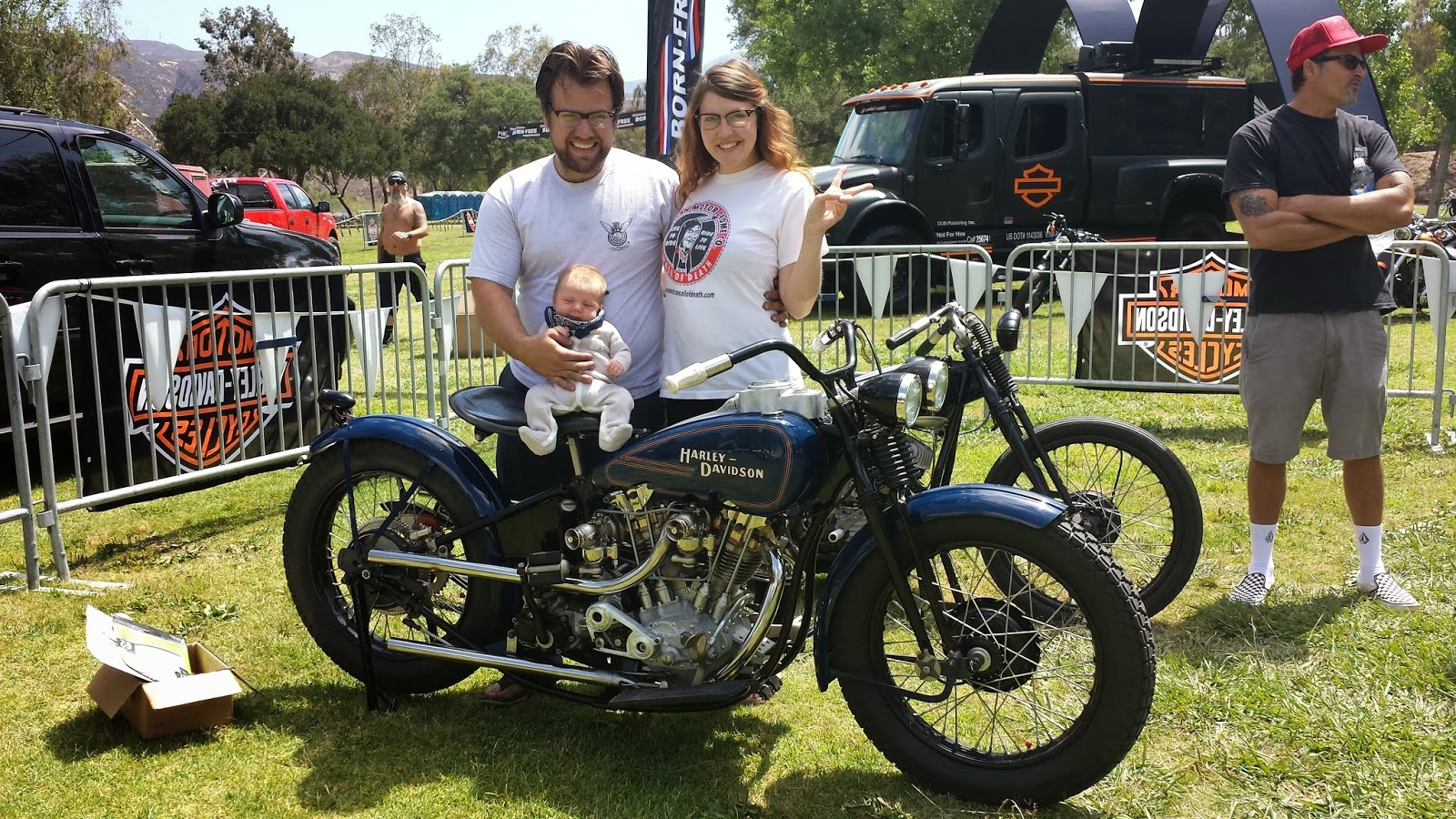 Brittney, lock and I headed west late last week for born free 6.  Here is a picture of us with the bike I built for the show.   This was the most challenging build that I have ever done.  I did a lot of the work ay friends shops while Brittney and I  were  living in Minnesota and waiting for our son to be born.  It's 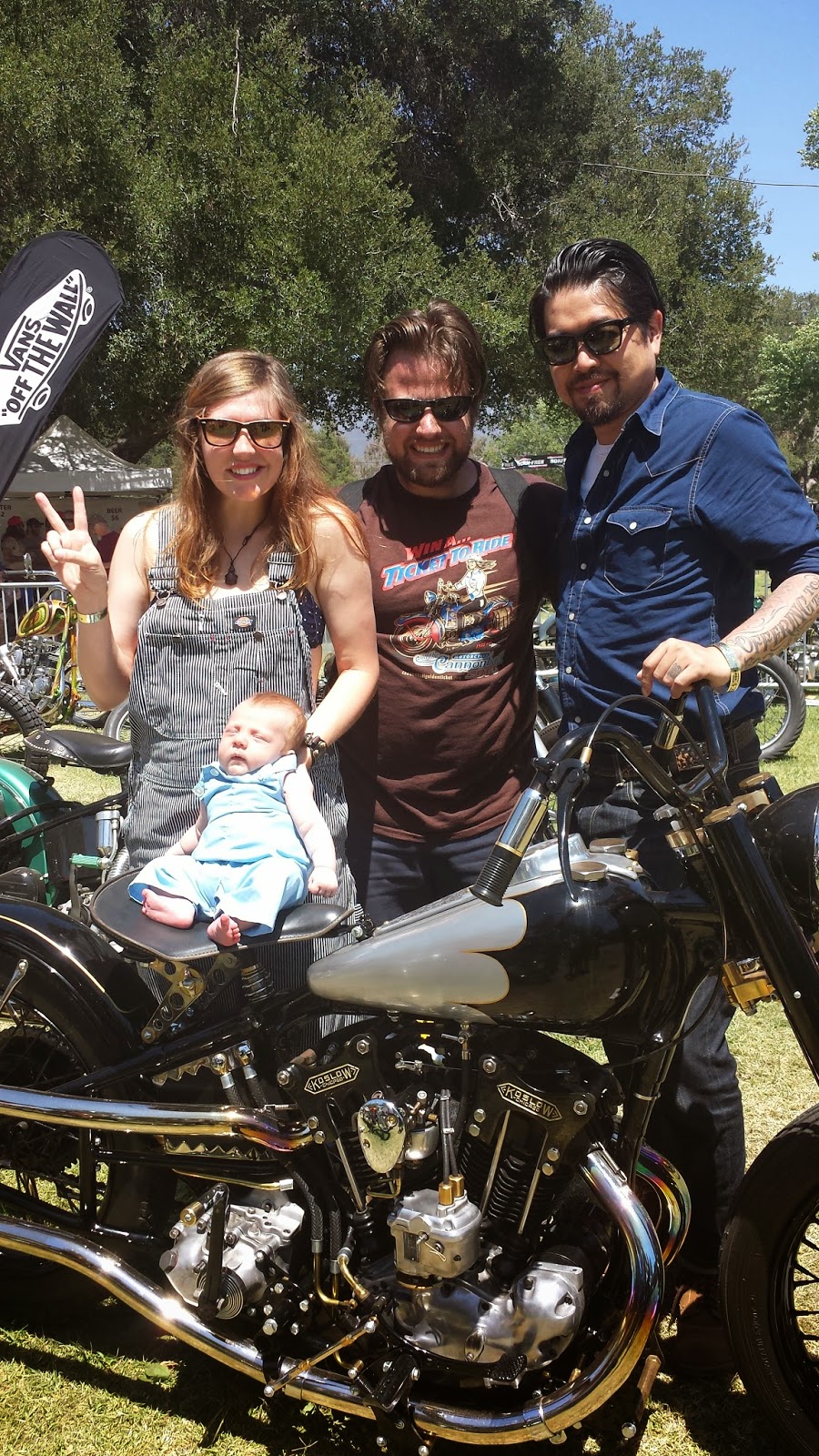 Born free is the best show in the country and it brings some of the best bikes in the world into one place.  Here is a pic of us with our friend sin from Japan and his bike.  The bike is built around a koslow motor.  Andy koslow worked at excelsior and helped develop their ohv top ends.  When excelsior went out of business in 31 he went on to make his own motors And top ends. 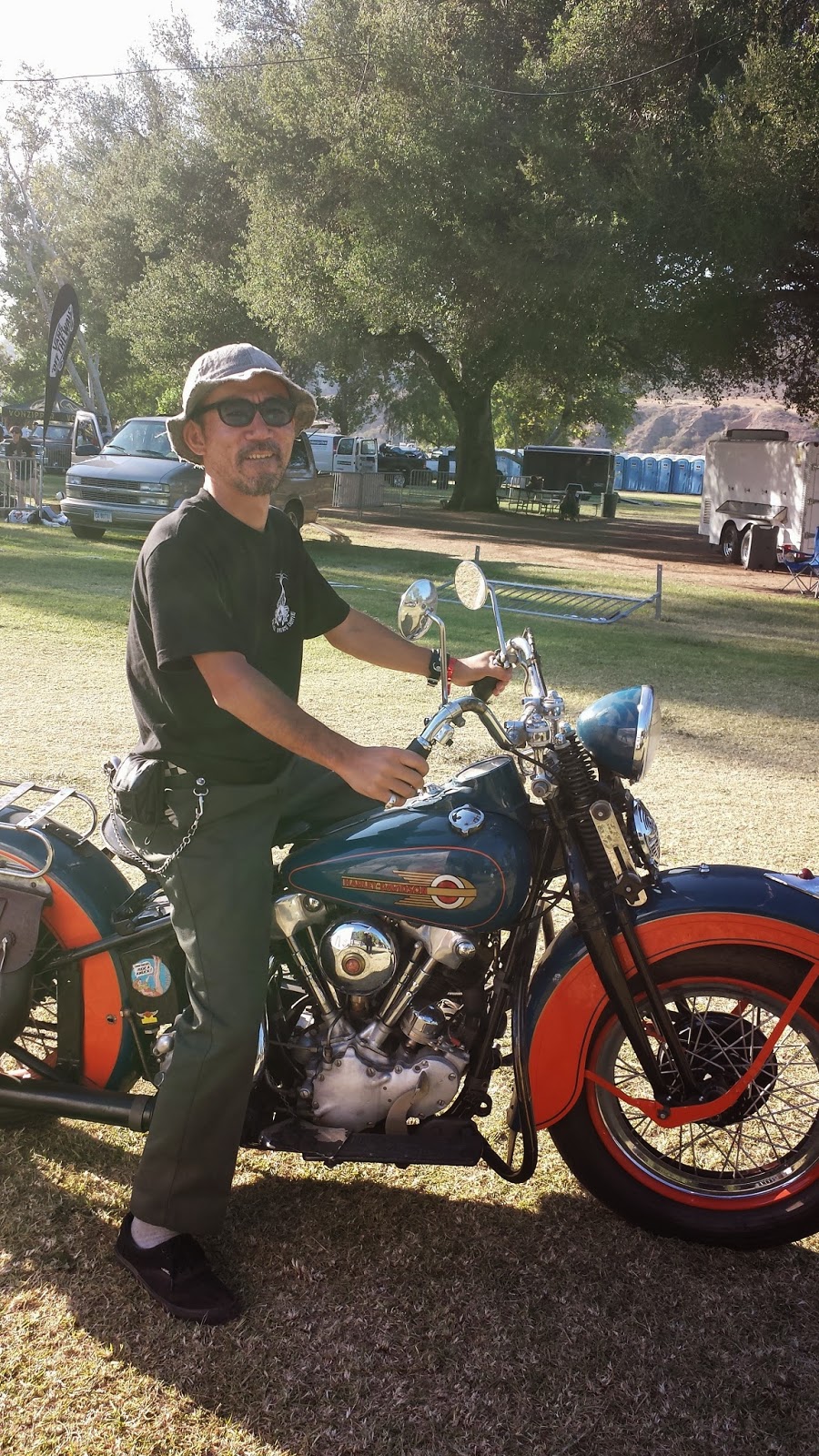 We also drew the two winners for our cannonball golden ticket project that we have been working on. The first place prize is an all expense paid trip to go on the cannonball and ride my bike from Florida to Washington along with a 100 other old bike enthusiasts.   Scott from the southern us won  the first prize, and will have a great time riding an El coast to coast

The second place prize is an all expense paid trip to go to Milwaukee and visit the Harley Davidson museum and give a behind the scenes look into the archives.    Kevin from Canada was drawn for that experience.

Thanks to everyone that signed up and participated.  It's great to see how many people are excited about old motorcycles and riding them.

There are only 2 weeks left to sign up for the CBGT!

In Two weeks we will pick the winner for the cannonball golden ticket project.   The cannonball golden ticket is an opportunity for someone to win an all expense paid trip to go ride my 1936 knucklehead on the 2014 cannonball.   My dad will be riding his 36 el and Brittney, my son and I will be running chase truck and supporting both riders.    Harley Davidson stepped up and donated a second place prize for someone from any where in the world to go and visit the Harley Museum and get a behind the scenes look at the archives. 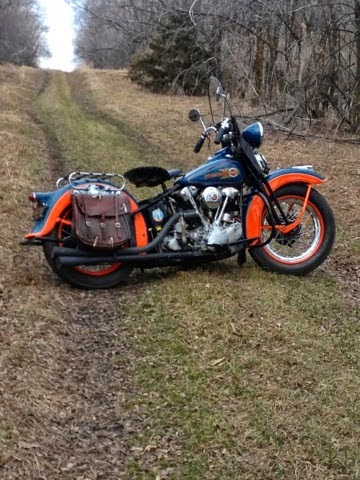 d
Here is a pic of my bike from the maternity photos that I shot with  Brittney a few months ago.   I have owned it for over ten years and ridden it and pushed it to its limits.   It is the oldest Harley Davidson to complete an Iron Butt Run, and the oldest bike to do one with a passenger.  I am comfortable in saying that it is the only bike that will be running the cannonball in September that has been ridden 24 hours straight and  gone 1100 miles in less that 24 hours. Even though a 36 el is over 75 years old, it performs like a new bike.  and holds up really well.  who ever wins the Cannonball Golden Ticket, will have 2 of the best weeks of their life. 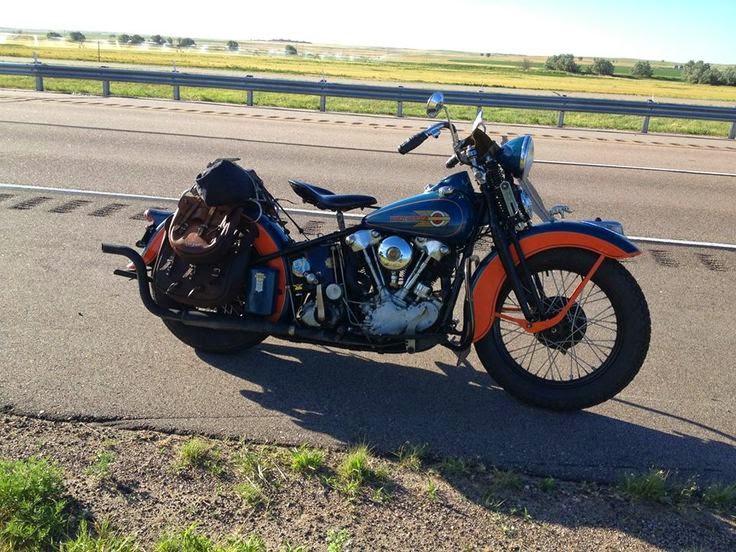 Surprisingly, I have not had very many people sign up for the a chance to win either prize.   I expected people to be doing back flips over this project, but apparently  it is difficult for someone to take 3 weeks off from their job.   This is a factor that I didn't consider when I came up with the project, because I wouldn't think twice about quitting a job to go ride a knucklehead from Florida to Washington state.  The odds of winning are really good for the few people who have signed up, and the odds are good for anyone else that has been waiting till the last minute to sign up. 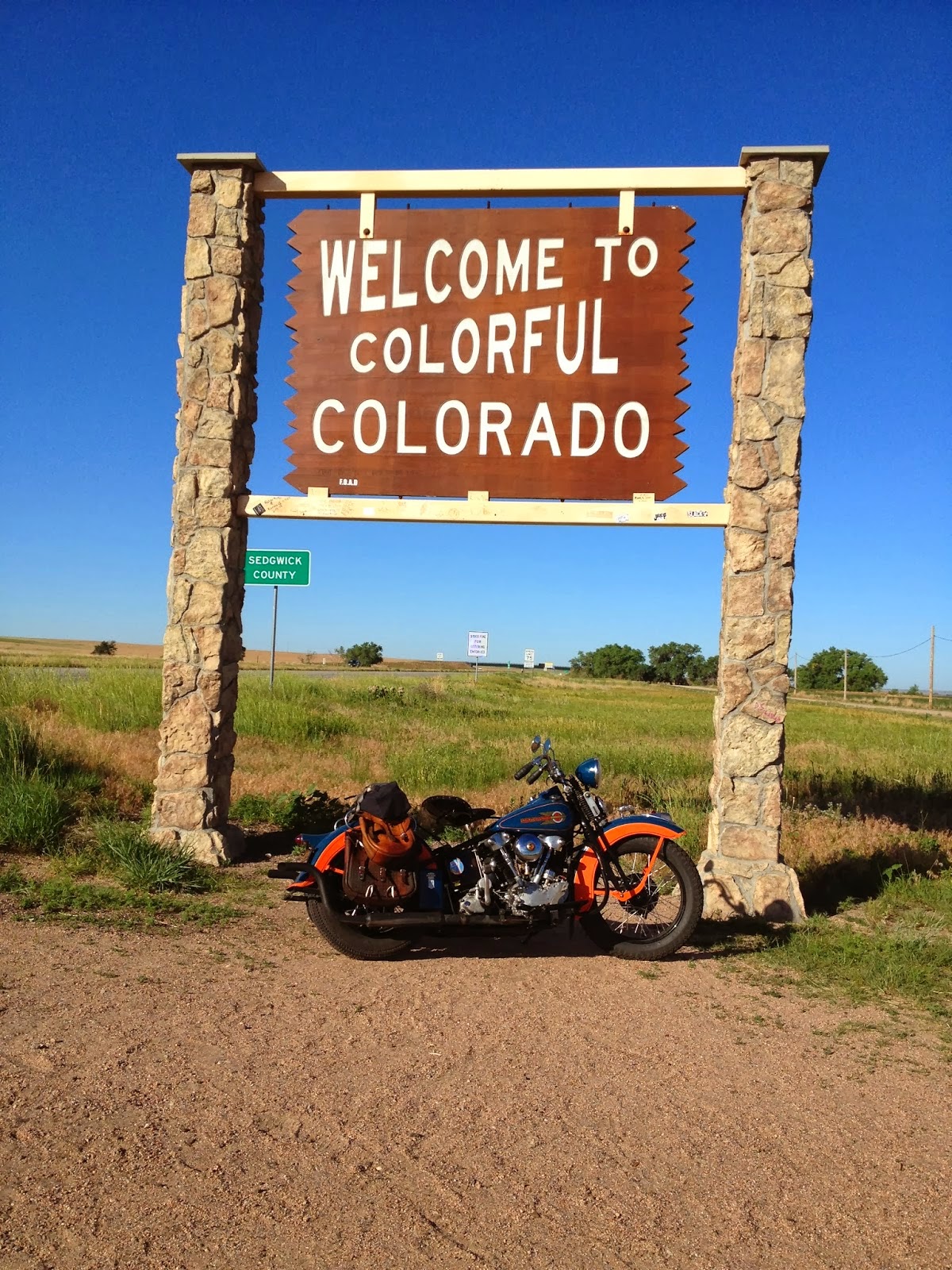 There are still 2 weeks to enter online and throught Mail,   Go to www.cannonballgoldenticket.com to find out more on how you can win the trip of a life time and the ultimate old bike experience.
Posted by Matt Olsen at 6/15/2014 11:06:00 AM No comments:

My son finally came out.

Our son- Lockheed Olsen was born on May 24th.   He is the most amazing thing that I have ever been a part of.  He was born at 3:45 am and weighed 9 pounds and 9 ounces he was 22 inches long,   brit had a beautiful and relatively quick labor that only lasted 5 hours.   We stayed with our friends Kevin and Amy on Minnesota for six weeks and change while we attended the rest of the prenatal appointments and waited for him to come out.   It was worth the wait and amazing. 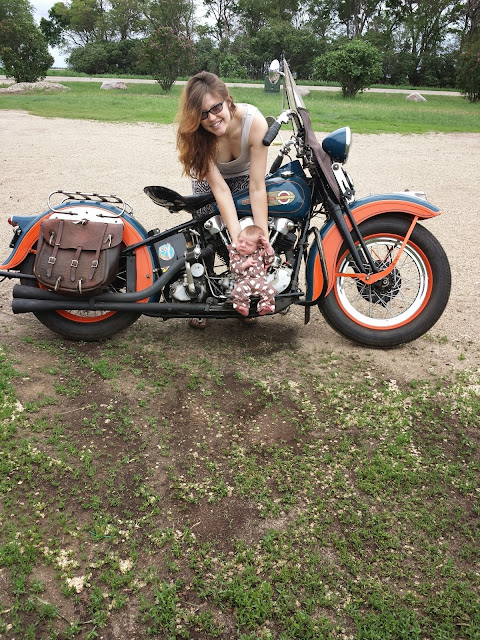