Here is a picture of our tool for aligning 1940 to 1965 fuel tanks. One off friends out east asked for a blueprint and I figured I'd post it up here for everyone's use. 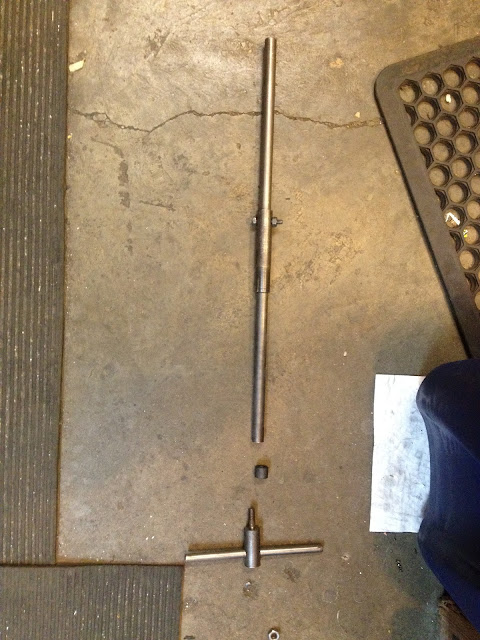 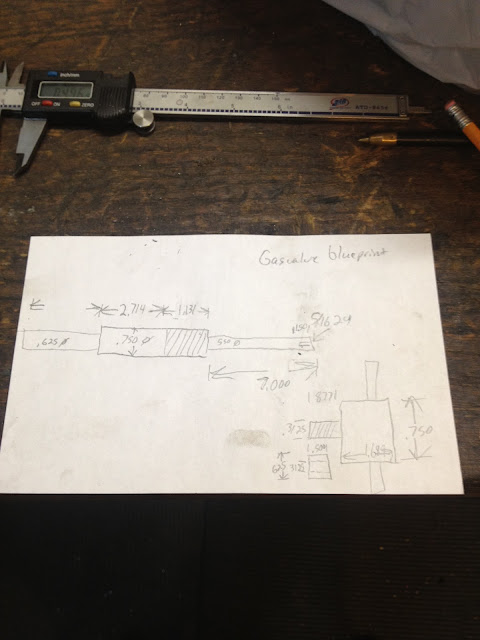 A couple months ago I posted a knucklehead for sale and was kind of surprised by how quickly it sold and how many people sent messages asking about it. I am going to occasionally list bikes for sale on this site. My dads selling this Shovelhead that he bought in davenport this year. He is the second owner of it. It's in excellent condition and is all original paint it has the original seat grips and pipes . And has less than 19,000 miles it's 80 cubic inches . The bike starts up nice it idles well and is a lot of fun to drive. If you are interested shoot my dad an email at carlcycle@nrctv.com 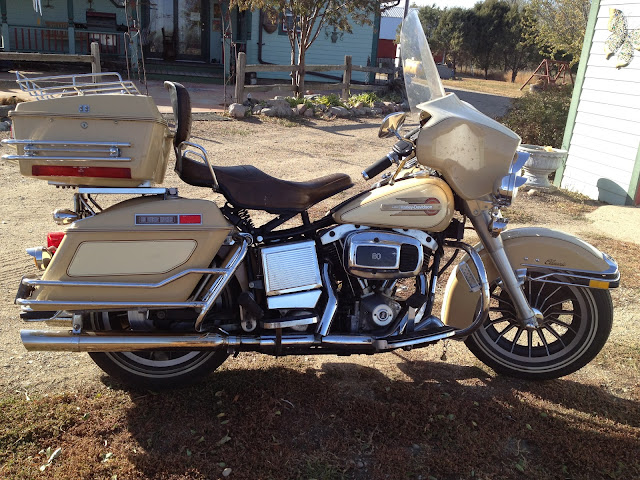 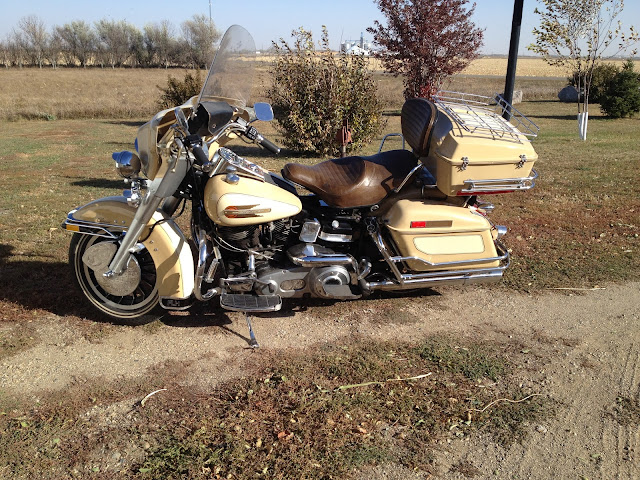 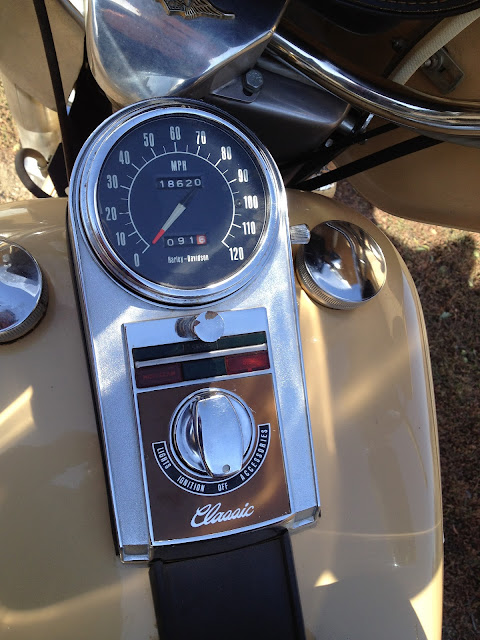 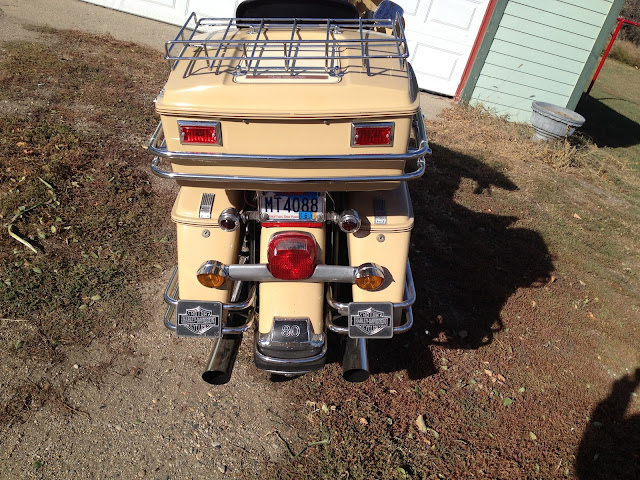 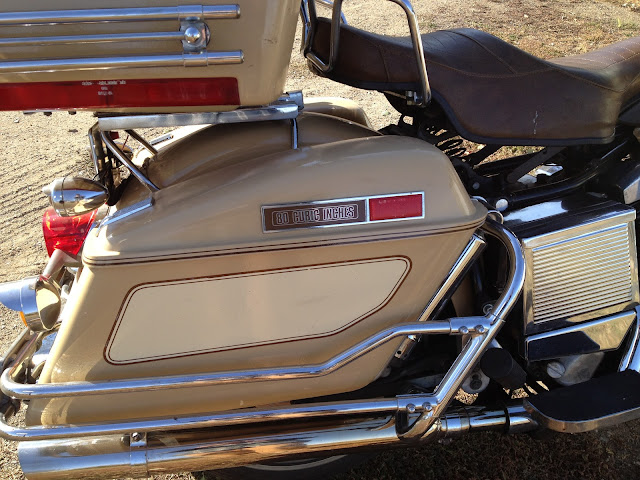 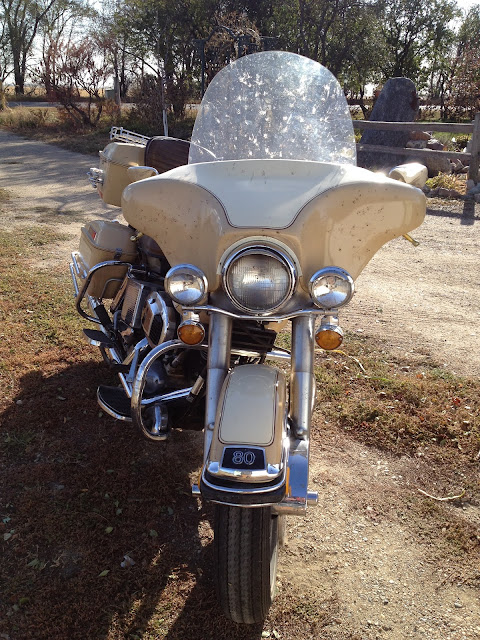 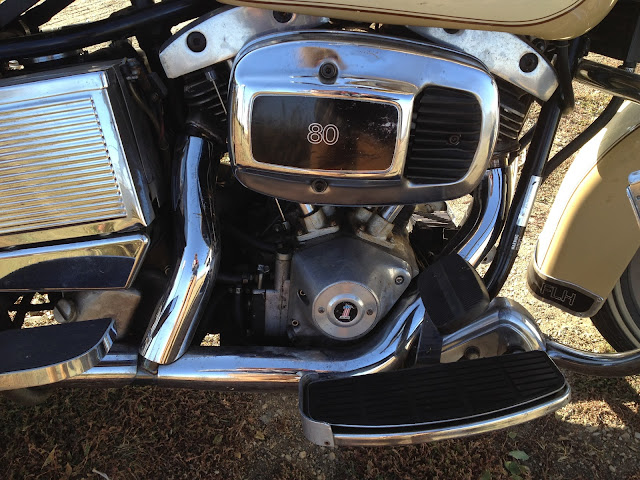 We've been jamming out and getting stuff done over here. Y dad is on his thirteenth set of flywheels and Jesse and I finished up the thirty eight frame and are working on some more. I went over to mikes today and laid out the panels for Doug's thirty nine. It's going to be Sherwood green and silver. I'm really excited for that bike 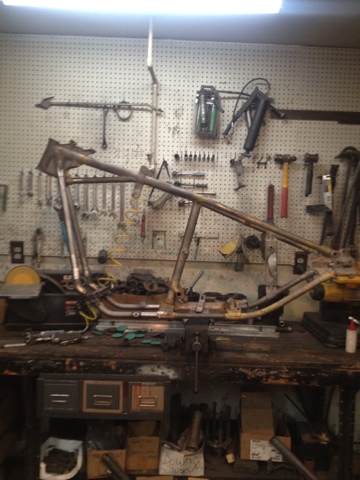 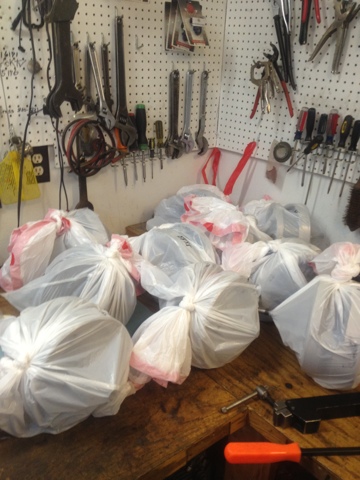 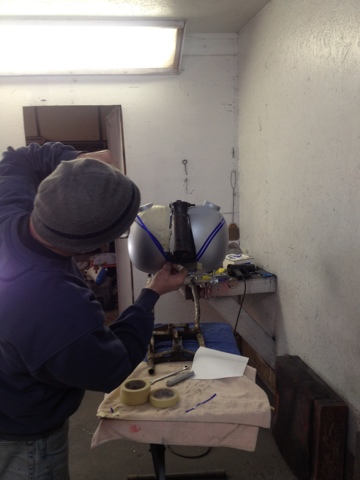 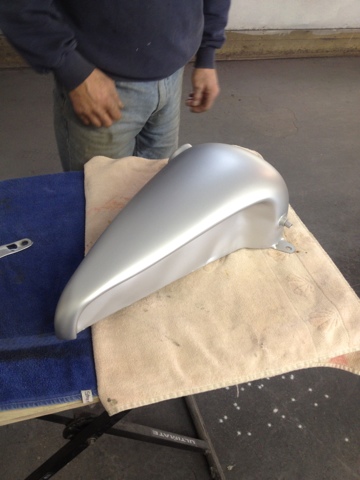 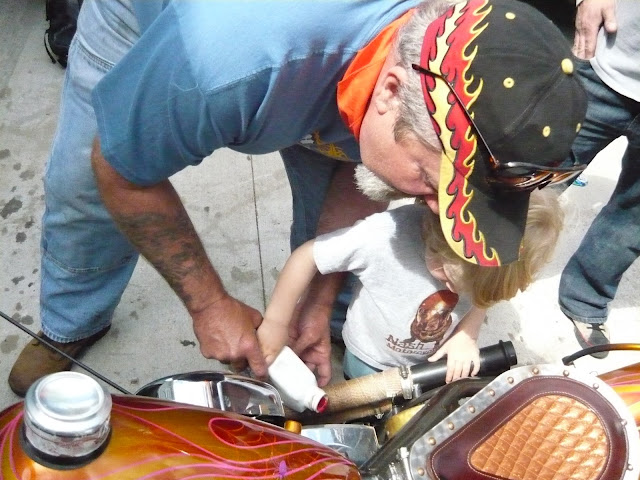 w
I found this picture of my dad and Mason filling transmission oil in Kevins bike from a couple years ago.   It is one of the coolest pics.

We were fortunate enough to make a deal to get this new old stock 1925 to 1929 left jd tank.  We are going to put it on our 29 jd.  I know its a long shot, but we really would love to find a nos or nice used original pain right tank to match it, do any of you guys have one? 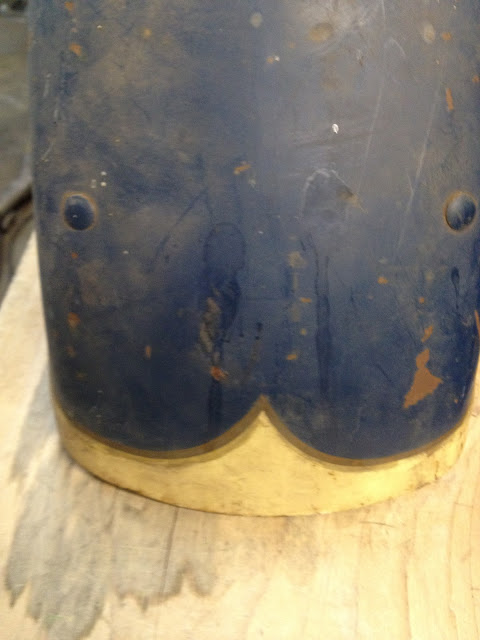 My friend Anthony sent me a new old stock vl fender to use for paint reference for a couple bikes that we are building.   We are going to paint Jack's 36 venetian blue and croydon cream and Scott is going to have his 38 venetian blue. 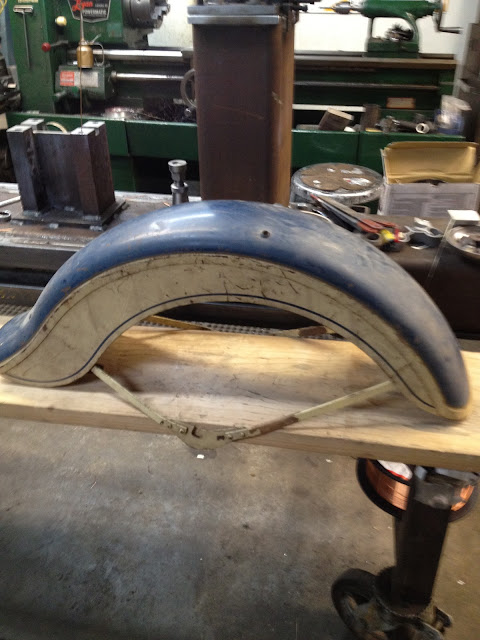 I am very thankful that I get to use this, and take the guess work out of matching a color.  This fender has never been on a bike and is 75 years old. 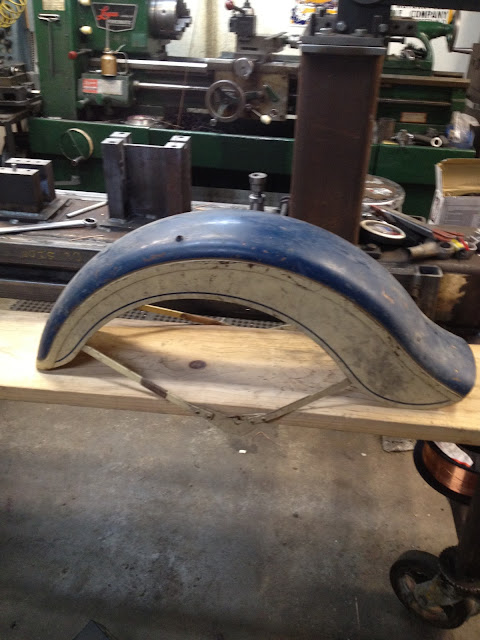 I told Anthony that the fender is nice enough to chrome plate. 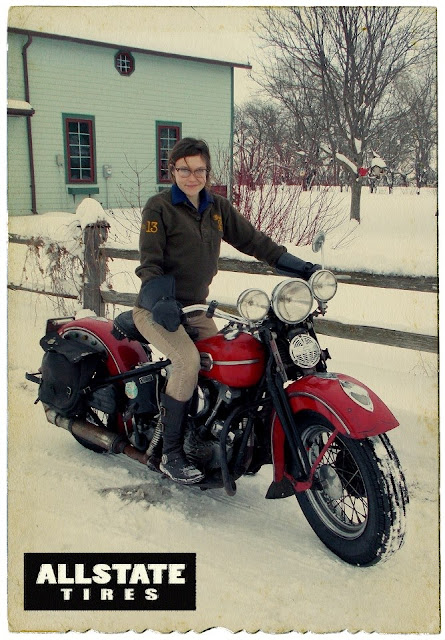 Here is the picture of Brittney on the 41 that Taxi chose for the Allstate Tire Catalog  I love the bike and brittney.  They are awesome 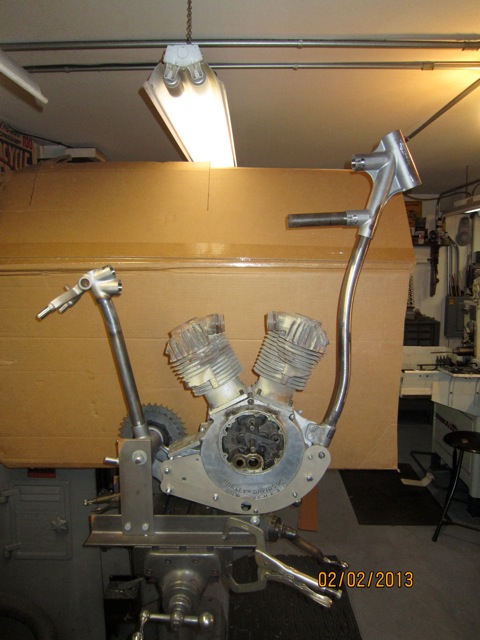 here is a shot of brittneys frame, that Mike is making.  we ran into an unforeseen issue.  We had planned on using a military excelsior fork from the late teens, but realized that it was way too long for the bike.   We would have had to raise the neck 4 inches, here is what it looks like with the 4 inches up setup!  It would be a little off!   We are going to have to make or find a frontend to use that is closer to racer proportions. 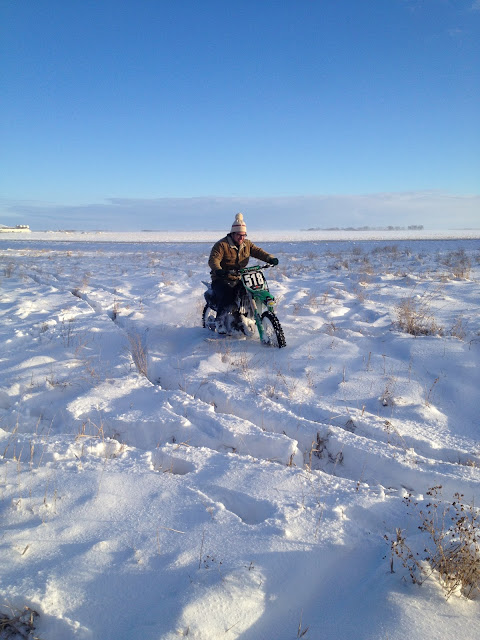 We spent some time riding dirt bike yesterday after it snowed a few inches.  It was a ton of fun.  It was a lot colder than it looks.  This picture really shows how barren South Dakota is. 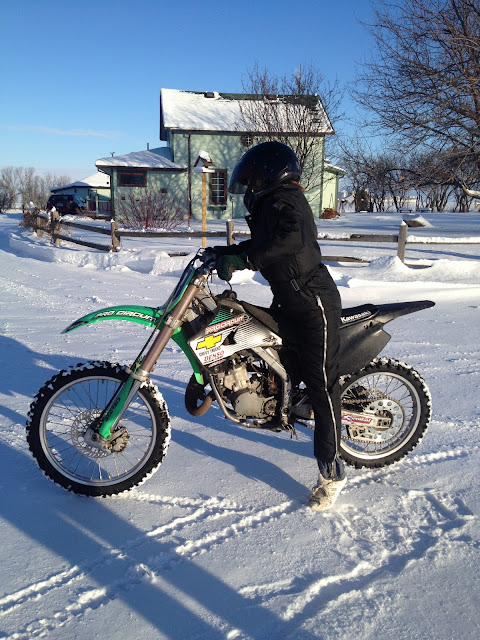