some HD museum pictures from this summer and misc. photos from the last two days 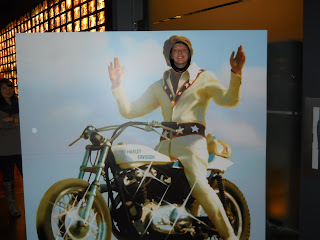 Here is evil Brittney. I though that this cut out was pretty neat. I have only worked on one sportster in my life and it was one of Evil's. Dale Walksler owns it and let me change the clutch on it, it was a pretty cool experience. It was neat to get a picture of Miss Brittney at this display in the museum. 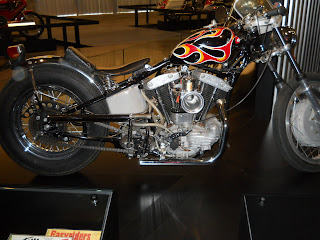 Here is the first magnum 45, This bike is legendary, it is a wr bottom end with a sportster top end. 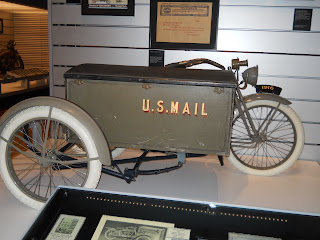 I think that this is a 16 Harley mail delivery rig. This bike is so cool, I would love to build something like this. Check out the lettering and the striping on the box, it is unreal. 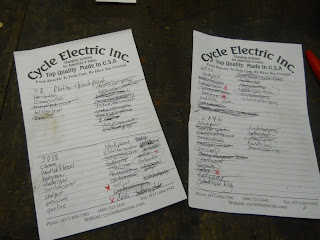 I spent the morning working on lists of painting, plating and polishing that still needed to be done on this batch of bikes. There is another sheet, but I didn't get it in the picture. 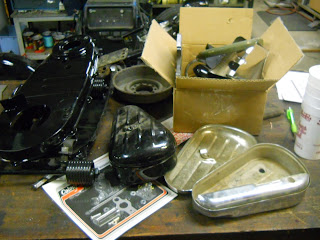 and here is all of the stuff rounded up for blasting, straightening and re finishing. This should wrap up the rest of the black paint for the five bikes we are working on right now. Some of it will be powder painted and some will have to be body shop painted. 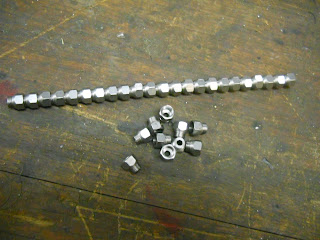 WOOO HOOO we got some more 42 to 57 brake crossover shaft spacers in. These little guys are one of the few parts that Harley made that didn't have a part number. There is a similar adapter for 45 front brakes, but the male threaded portion of it is smaller than the male thread on these spacers which is 5/16 32. 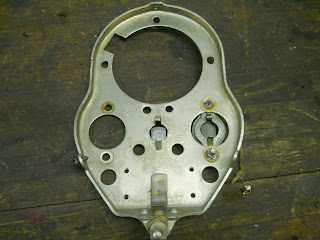 Here is the 1938 only dash base for Jim's 38. It doesn't have spacers on the side mounting screws, and they are a 10 32 machined thread rather than a self tapping screw like 39-46 dashes. The post that the speedo light knob goes into is also shorter than the 39 and later posts. It is nickle plated, The dash base on my dad's 40 and 41 el are also nickle plated. I took this picture before I rebuilt the speedo light spring plate and the generator socket. 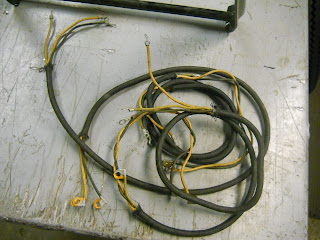 These are the wires that I am going to use on Jim's 38, they are new old stock and in good condition. I will have to cut them to length, but that isn't too big of a deal