High temperature for today is 16 degrees

The expected high temperature is supposed to be 16 degrees. Weather like this always makes me think of summer time riding, So I decided to post some old pictures from this summer rather than whats going on in the shop. It is supposed to be in the forties tomorrow and sunday so I am pretty excited to go ride bike. Cold and hot are relative to your surroundings. 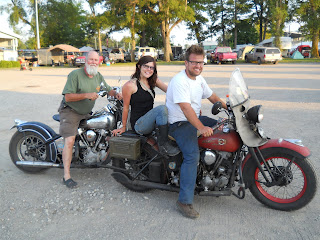 Here is a cool picture of the colonel/Reverend/sir Stanley D Miller, Brittney and I. I had a great conversation with Stanley the other day and he is back to riding motorcycles and being the old bike and good will ambassador that we all know him for. 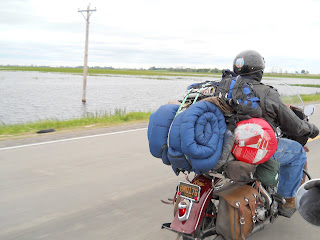 I always love seeing my dad's 39 loaded down and ready for action. This bike gets a lot of use and holds up well. three years ago we put our first set of 39 prototype gears into this bike and they have over 18 thousand miles on them and have held up extremely well. 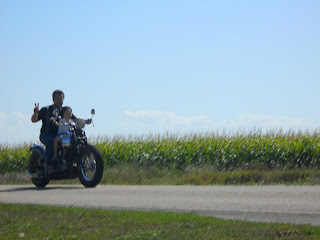 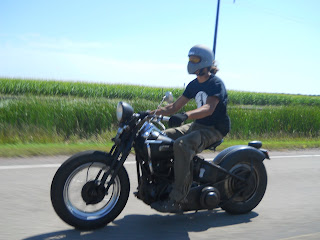 Here is a picture of Mr Lock Baker cruising around on our 47 El. He stopped by the shop after the rally and hung out for a day. It was pretty cool Go check out his website, he builds some really neat bikes. 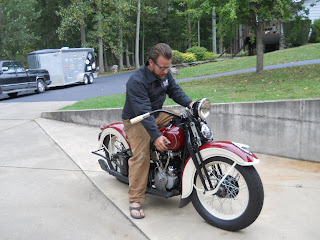 Here is a picture of me after taking one of my friends 36s for a spin. This was the first 36 that I ever drove. It is a nice bike and it was fun to take it for a cool September spin. 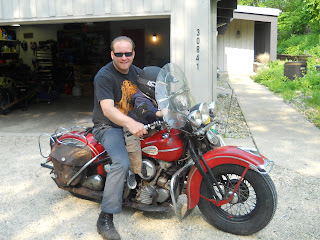 Here is the number 1 designer Casey giving his son Cole, a ride on our original Paint 46 knucklehead. Cole and his brother Carson are awesome little kids. 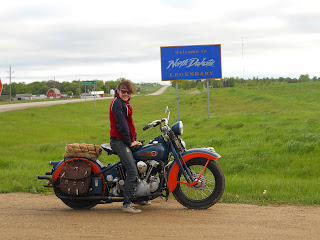 This is a great picture of Miss Brittney, I took this picture on our first trip together. We rode up to North Dakota to hang out with Delmar and talk about machining and old bikes. While we were in North Dakota, a huge storm showed up and we ended up not being able to head south till the next day. That trip was 150 miles and the longest trip that she had ever gone. We rode over 7000 miles the rest of the summer. Brittney sat on a pillow and put her feet on the top frame tubes. She is a lot tougher than me.